In 2018, the two software companies COUNT IT GmbH and ventopay GmbH decided to build a joint new company building, which was to be connected directly to the south to the existing building of COUNT IT. 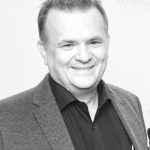 I had been looking for a facade for a long time that was flexible, available in different sizes, modular, durable and inexpensive to maintain.
The planum facade meets all these requirements and impresses with its discreet elegance and plasticity.

From the very beginning, the construction of modern workplaces for the employees was the focus of the design work. A design theme that runs through all decisions like a red thread is the work with the greatest possible contrast. Thus, the new building clearly deviates in its architectural language from the existing building and sets a contemporary counterpart to it. In contrast to the existing building with its regular, vertically oriented perforated facade, the new building plays with the horizontal in the form of a Planum 32 facade by DOMICO.

The window openings are also designed as a counterpoint to the existing building. The window bands, which appear as filigree and uniform as possible as a mullion and transom construction, are interrupted at irregular intervals by white screens, which lie in the plane of the metal façade and are finished with the same sheet metal as the Planum façade.

The metal façade clearly, yet subtly, emphasizes the horizontality of the structure and gives the building a caching effect. The irregularity of the panel arrangement, divided with 1cm wide horizontal and vertical joints, which jump in the different batches in a grid of 125cm, further enhances the liveliness of the facade and the horizontality, as the vertical joints blur due to the offset, but still structure the surface. This design is complex in execution and I have not noticed it in this form in this product in another project.

The basic idea of the design was the so-called pixel. In analogy to the individual pixels of a computer image, the shape and size of the building emerged from the future requirements of the employees’ workplaces. The room size with a grid dimension of 5 × 5 m, which provides space for a maximum occupancy of four workers, is called a pixel. The addition of these individual pixels results in freely combinable office sizes. This also ensures flexibility for future uses, since the employees of individual pixels can be moved to another location at any time, or entire departments can be moved to another location in the building due to the modularity, without having to reconstruct the building.

The circulation areas of the two companies on the individual floors are designed significantly differently. On the first and second floors, the walls jump back and forth, creating a broken-up circulation zone that automatically creates areas for lingering and discussion. The individual pixels can be clearly read from the outside and are supplemented at various points by colorful niches.

On the third and fourth floors, the circulation zone is more minimalist and linear in design, with a tapering of the corridor zones visually extending it further. The corridor is completely broken up on both sides with glass walls, thus offering maximum transparency.

The company COUNT IT uses the two upper floors, the company ventopay the first and second floor. In the first floor zone, areas serving the general public such as meeting rooms, lounge, communication areas, employee terrace and the reception are arranged.

The owners’ concept also includes holding celebrations and presentations, in their own building. For this reason, the areas on the first floor can be opened up as far as possible by means of mobile partition walls. A full kitchen with bar is then available for entertaining guests.
In order to better integrate the basement with the first floor, the so-called Activity Room was opened up from the first floor with a slide and an adjacent staircase. In this area, employees can discuss business solutions in a relaxed atmosphere with table soccer and billiards, or simply relax if necessary.

A spacious park area for employees is also accessible from the first floor. Immediately in front of the exits is an extensive employee terrace, which is positioned somewhat elevated in the terrain and from which one has a good overview of the park to the adjacent forest. It is also planned to erect a pavilion in the inner courtyard, which will serve as a stage for a band, the barbecue, or as a shelter in case of rain during company events.

The end of the facility is formed in the southwest by an exposed concrete structure half-buried in the slope, which will take over service functions such as the storage of garbage and garden tools.