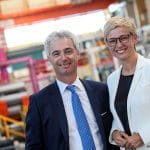 The production of a sliding arch roof with shiny aluminium sheet was a premiere for both companies. Together they succeeded in creating an architectural highlight.

This step will also make AMAG the leading competence centre for rolled aluminium products. “We are extremely satisfied with the precise and on-schedule realization of this project,” explained AMAG CEO Helmut Wieser at the opening of the new plant. With continuous investments totalling around one billion euros (90% of which in Austria) over a period of 10 years, the Ranshofen-based company succeeded in transforming itself into the most modern European aluminium location. Around 300 million euros of this is attributable to the most recent plant expansion. What is impressive is that the majority of the investments were financed from the company’s own cash flow.

The new plant was built in a record time of only 16 months. According to the company’s announcement, 450 new jobs will be created. With currently 1,750 employees, AMAG is a leading company in the region.
In addition to doubling its production capacity to over 300,000 tons, AMAG can now also produce wider, cold-rolled aluminum sheets and strips. The focus on special rolled products and sustainable production remains unchanged. For this reason, the foundry was expanded and recycling capacities increased. “With the expanded product dimensions and 60 years of experience with aluminium, new sales potentials are opening up, particularly in the automotive, aviation, commercial vehicle, packaging and mechanical engineering sectors,” explained Wieser.

For the cold rolling mill, DOMICO produced 14,000 m² of Planum façade and approx. 2,000 m² of GBS façade, some of which was curved. Three colours were used: RAL 7016, SKYBLUE and special band anodised aluminium.