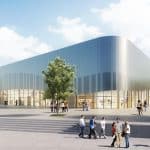 The large sports hall, which took two years to build, has been an important venue for sporting and cultural events in Heidelberg since its opening… 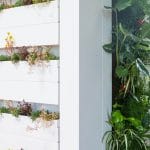 Today, facade greening is used as a design, but above all as an ecological and energetic improvement of buildings. They bring green into the city… 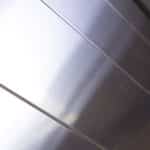 Planum®INOX is a completely new combination of galvanized steel as a substrate material with a stainless steel surface. In addition, a nano ceramic coating… 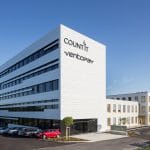 From the very beginning, the construction of modern workplaces for the employees was the focus of the design work. A design theme that runs through… 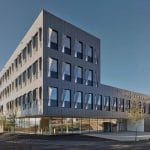 For an in-depth consideration of the building and, above all, for an understanding of the design ideas, it is advantageous to know the self-image of… 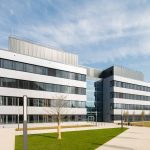 A new laboratory building has been constructed for BASF Coatings GmbH, which, with its clear cubature and puristic effect, sets a striking accent on the… 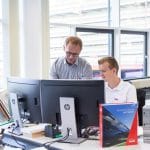 Sound theoretical training is a matter of course for us, but “learning by doing” is also at the top of the list when it comes… 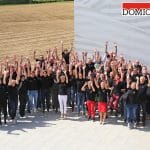 Upper Austria Job Week – We are there!

You always wanted to get a personal impression of our company and the different jobs at DOMICO?
You are interested in the various training… 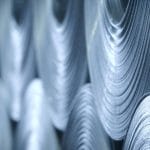 Good to know! The steel cycle

Iron (Fe), the basic material for steel production, is the most common element on earth. With a mass fraction of 5%, iron ore forms a… 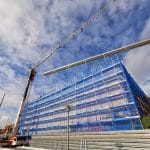 The Friedrich Sponsel Triple Hall with a total usable area of around 940 m² was built in 1971 in the center of Erlangen. The aging… 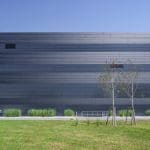 With almost 3,500 m² of cleanroom space in ISO 8 and ISO 5 cleanliness classes and a cleanroom height of up to 18 meters, the… 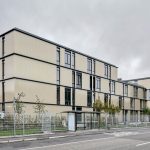 NETZ PPA also offers technical entry-level training for refugees and technical internships for school students. In total, up to 300 trainees and interns can be… 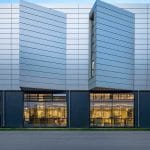 The new plant ensemble of Rosenberger Hochfrequenztechnik GmbH in Fridolfing proves that architecture, functionality and modern façade technology can also form a perfect combination in… 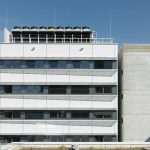 Design and utilization concept
The aim of the building project was to combine the various uses of OVESCO Endoscopy AG, which had previously been…

Design and utilization concept
The aim of the building project was to combine the various uses of OVESCO Endoscopy AG, which had previously been…

The large sports hall, which took two years to build, has been an important venue for sporting and cultural events in Heidelberg since its opening in 2021. A special architectural feature is the successful facade design with the rounded and curved DOMICO Planum system.

According to the city of Heidelberg, more than one in four citizens is active in one of the 120 sports clubs, which have a total membership of around 45,000. The capacities of the existing sports facilities in Heidelberg have long been insufficient for clubs and school sports. In addition, no hall in the city offered the possibility of holding sports events with more than 1,500 spectators. Good reasons to advocate for the construction of a large sports hall. It has now been in operation since 2021 and bears the name “SNP dome”.

The new hall can accommodate around 5,000 spectators and is now an important venue for sporting and cultural events in the Heidelberg area. Among other things, the SNP dome serves as a training and competition venue for many sports clubs: For example, the Bundesliga basketball team “MLP Academics Heidelberg” uses it as its home venue, and in handball, the well-known “Rhein-Neckar Löwen” use it as a second-game venue. School sports also take place in the hall. For planning and construction, the client opted for the joint concept of Architektur Concept Pfaffhausen + Staudte GbR and ZECH Sports GmbH (formerly BAM Sports GmbH) as general contractor. The groundbreaking ceremony took place in September 2018.

Round corners and la-ola waves
The architecturally successful design of the metallic outer shell of the SNP dome is an eye-catcher in the “Heidelberg Innovation Park”. To implement their architectural idea of the vertically structured façade grid, the planners and client opted for Planum system profiles from DOMICO. The tried-and-tested, robust façade system with a flat surface and covering widths of up to 800 mm gives exterior surfaces a generous line and high-quality appearance. Different profile widths and installation options, but also combinations with other DOMICO profiles, also offer architects a wide range of design options. The result of this production process is a high installation quality and durability of the system. In addition, the highest possible degree of prefabrication ensures economical construction and, in terms of operating costs, also building maintenance. DOMICO Planum façade profiles with a construction width of 400 mm were used for the façade cladding on the SNP dome. Thanks to this small-scale design, the segmental arrangement of the Planum profiles is hardly noticeable in the curvature. While the upper, all-round facade finish of the large sports hall runs exactly horizontally, the lower facade finishes are wave-shaped. The second “la-la wave” is created within the surface by the vertical arrangement of the PLANUM profiles in two color coatings – in the darker and lighter metallic colors RAL 9007 and RAL 9006.