BASF, as a producer of paints for metallic substrates, has chosen the quality leader in ventilated curtain walls for the presentation of its own product at the new company building in Münster: The DOMICO PLANUM facade system. 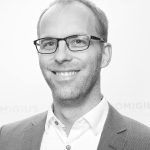 DOMICO’s products and expertise made it possible to realize the design idea economically; a high-quality façade that exercises restraint and at the same time sets a striking accent on the BASF plant site.

A new laboratory building has been constructed for BASF Coatings GmbH, which, with its clear cubature and puristic effect, sets a striking accent on the plant premises in Münster Hiltrup. The four-story building, with a technology center as a staggered floor, follows the orthogonal block field structure and is oriented on the one hand to the historically conditioned building form and on the other hand to the new building.
On the other hand, it allows an unobstructed view of the main road to the surrounding factory and warehouse buildings as well as open spaces.

The free-standing structure presents itself as both self-confident and restrained. The strength of the design lies in its reduction, whose clear formal language concentrates on the essentials. The architectural concept is underlined by the choice of two facade materials:
Glass and aluminum sheets create transparent surfaces next to closed ones, which harmonize very well with each other despite or precisely because of the contrast. The connecting structure, which recedes from the alignment, is designed entirely as a filigree post-and-beam construction and allows generous views of the imposing staircase. In the
At dusk and at night, the staircase is accentuated by individually controllable lighting so that, if desired, a long-distance effect visible from afar can be achieved.

The use of the planum façade from DOMICO made it possible to realize the basic design idea of also designing the façade with a metallic material for a manufacturer of paints for metallic substrates. The facade was coated with a special paint. For this purpose, the sheet metal coils were coated with the paint developed by a subsidiary of BASF Coatings GmbH (Akzo- Nobel) and formed into facade sheets and edged by DOMICO. Depending on the direction of view and the time of day, the shimmering special paint
the direction of view and the time of day. The sheets were deliberately placed on the façade so that a slight color gradient is visible, which further enhances the nuance. Six different silver color shades were used on a facade area of around 2,000 square meters. With the help of the facade products as well as the expertise of DOMICO, it was possible to implement this design idea economically. The entire building demonstrates high design and material quality without appearing excessive.

The flexible floor plan of the new laboratory building ensures efficient work processes, which take into account both places for communication and exchange, but also retreats for concentrated work. While the laboratories, offices and evaluation rooms are located on the sides of the façade and are thus optimally supplied with daylight, the ancillary rooms and technical facilities required for the operation of the laboratories were arranged in the central zones. In addition, centrally arranged creative and break rooms promote interdisciplinary exchange between researchers. In the northern laboratory wing of the third floor, a contiguous open-plan room with spray booths was integrated so that fresh and exhaust air can be supplied via the technical center directly above.